Awakening to a Deeper and Richer Yoga Experience My original intention for starting yoga had been to improve my fitness. Based upon what I was reading at the time, six years ago, I expected that adding this activity to my training regime would improve my flexibility, balance, strength and endurance. I intended for yoga to complement my time on the bike and in the gym. Thus, not surprisingly given this orientation; the physical aspect of asanas and breathing represented the vast majority of my early yoga path.

I’ve been feeling for a while now that I wished to deepen and strengthen my yoga practice. I have read a few books and listened to some teachers speak of the holistic nature of yoga as a way of life.

This growing desire applied to my asanas of course. However, fundamentally, I wanted to understand the ways in which the physical practice were linked to the spiritual and philosophical foundations of yoga. Asana and Pranayama are only two among The Eight Limbs. Moreover, their main purpose is to help preserve a healthy body, which permits the development of a healthy mind and spirit, with which we can lead an enlightened life; better connected with ourselves, and the world around us.

So, as a first step to satisfy my thirst for this new knowledge, I signed up for what turned out to be an informative two hour talk on the subject of the Eight Limbs by Michael Hutkins. http://michaelhutkinsyoga.com Michael recommended the Sivinanda Ashram Yoga Camp as a source for further study and practical learning. Several class participants had already attended the Camp and spoke positively of their experiences. I copied down the url and promised myself that I would look into it. I wasn’t sure about the idea, but it seemed to hold promise.

The results of my on-line search were pretty encouraging. Their website http://www.sivananda.org/camp/seemed to offer a good balance between yoga practice, meditation and chanting and teaching opportunities in a supportive and enchanting environment. These were the bases I wished to cover. When I saw that last weekend was advertised as a snow shoe adventure retreat - the deal was sealed!

As Friday morning approached, and I packed to get ready for my two and a half hour drive to Val Morin, my anticipation was tempered by a low-level anxiety. This promised to be a far more intensive immersion than I had previously undertaken. I was worried; would I like it, would my practice be up to snuff?

My first impression upon arriving was favourable. The setting is beautiful. Nestled into a bucolic Laurentian valley, the main campus is surrounded by endless canopies of green and white (in winter anyway) covering rolling hills. The camp is far from any busy hustle and bustle. The solitude is cocooned by densely wooded forests.

My confidence continued nudging upwards when I got to the lobby of the main lodge and the front desk. The staff, all karma volunteers, were warm, friendly and helpful. I cannot be certain whether my earlier misgivings were apparent. I attempted to put on a brave face, claiming that I was approaching the retreat with an open mind and heart. What. Where did I get that from? I must have read it on the website! But I suspect that they treat all visitors in way that makes them feel at home.

My private room, shared bathroom down the hall, reminded me of a college dorm. Everything was clean and tidy (and warm, and well-lit - unlike my teahouse trek). Check. 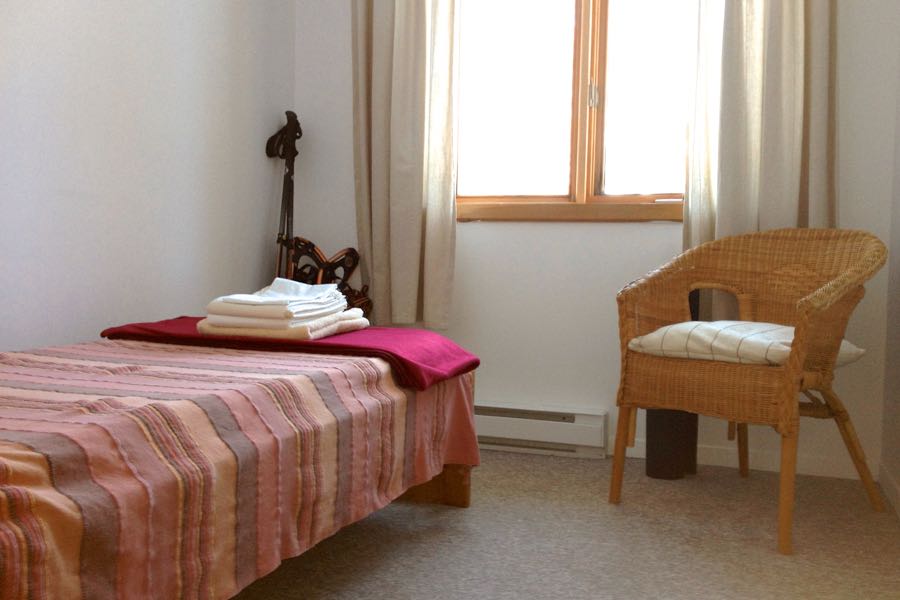 So. It was time for the real adventure to begin. I made my way to the practice room and placed my mat down. Thankfully, my encounter at the front desk had prepared me, leaving my long fleece pants and hoodie on. The two yoga outfits I normally wear remained unused in my travel bag. I pretty much lived in the same outfit, and through four yoga practices all weekend. Suffice to say, they were plenty ready for the wash when I got home.

Among the many enjoyable camp experiences I had - I can say that the yoga was the highlight of my retreat. The teachers were all highly skilled. They led the classes with a sing-song quality voice that appealed to me. I liked the predictability of the Sivinanda practice. The poses followed the same pattern each time. As well, I liked the fact that the poses were repeated. I found that after a few rounds, I was easing into a familiar groove that made me feel comfortable and allowed me to concentrate upon improving my form. I cannot see how two, two hour yoga practices can be fit into a normal daily routine, but for an intensive retreat setting it was ideal.

Saturday morning, I woke with the rest of the camp at 5:30 am to the ringing of the bell. The bell sounded again 25 minutes later calling us to the temple for meditation and chanting. I believe that the silent meditation was the most powerful take-away for me. I have read, and studied Mindfulness so I was well aware of the benefits of a daily meditation session. Yet, despite this encouragement, I had never stirred myself to introduce this into my life as a regular habit. I found the 25 minute silent meditation calming. Though strangely, meditating was highly invigorating at the same time. I liked some aspects of the chanting. I could not get fully into it (I rarely stand and dance at concerts) but there was a hypnotic effect that seemed to induce heightened focus and concentration. One of the big impressions I came away with was the transition from the pre-dawn dark into the light of new day awakening to untold possibility and delight.

After nearly two hours of sitting cross-legged, I un-linked my lower back and scurried off to collect my mat. Then I returned to the practice room for another pretty intense yoga session. Lot’s of Sun Salutations in the Sivinanda routine. They also practice headstand every time. I’m not quite there yet, but thankfully in my recent private teaching sessions with Kelly, I was able to practice my interim step of getting my knees up onto my elbows. I was very pleased with myself (note to self: more effort is required to eliminate the ego from my practice).

At about this time, I’m waking up to the realization that I’ve been up for four hours, been incredibly busy, and have not eaten a single bite. We gathered in the dining hall for brunch (signalled by the ringing bell). As advertised - all meals were vegetarian. Most fare was tasty, but once again, as a first-timer I was coping with a significant amount of change.

Remarkably, we squeezed in two snow shoe outings on Saturday The first was a 90 minute excursion to a temple placed upon the crest of a nearby hill. The second was an after-dinner night time walk for an hour upon a gentle trail. In each case, the fresh snow was a delight, soft and fluffy. Hiking in the dark was a treat. A few of us arranged for a late check-out on Sunday and took advantage of the excellent conditions one last time. I mean, really, we couldn’t let the opportunity pass us by. The temperature was pretty cold. Though I have rarely felt the cold when snow shoeing. The combination of proper clothing, vigorous active and a positive attitude can combat most of what Mother Nature serves up. By chance, Wendy and I met another Ottawa yogi, Heather who joined us for the Sunday farewell loop. We had a ball. Meeting some new people from Ottawa, who shared my keen interest in genuine yoga, enhanced my feeling of community. 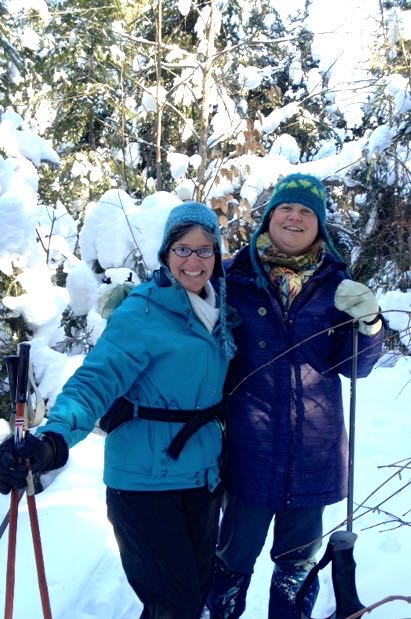 I have tried to write a little about each element of the retreat. Upon reflection, I realize it’s much more about the whole of the experience. The schedule was demanding. Every single activity provided its own challenges. Ultimately, the weekend flowed much more as a natural rolling out of successive activities. There was a pattern, a rhythm to each day that carried you along. I note that I never once craved a potato chip! There was no idleness. There were few moments to spare. Conversely, there was no sense of the being frantic. The plague that overwhelms us daily as we face multiple and conflicting mini-crises in our real world lives. I was an integral part of a small community moving in harmony to the tune of its own song. It was not a sense of being austere; but more a sensation of being just right. There was nothing wasted, nothing overdone, never too much, never too little.

As I was driving home Sunday afternoon I experienced an inner peace. I was energized and refreshed. I had some creative energy restored. I could run my finger along a keen edge of what had been a dull blade of late. In the end I could not isolate any one single factor that caused this. It was the cumulative effect of the weekend retreat. All of the things wrapped up together. This is one lesson. The Eight Limbs of Yoga, like the weekend are meant to operate together in harmony. 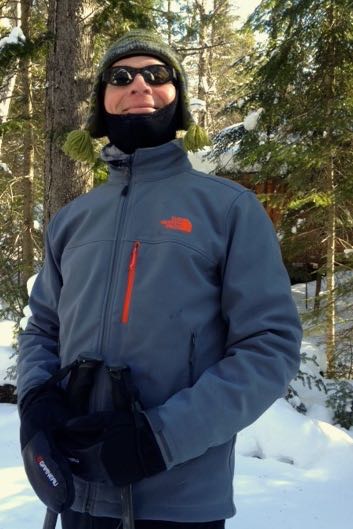 I’m so glad I went. There is much more to learn and practice. But now I can comfortably and correctly place the asanas and pranayama as only two limbs of yoga. I better appreciate that their purpose is to maintain a healthy body so that I can cultivate a practice which enables me to promote my healthy mind and spirit. In turn, I will be better equipped so that I might lead a a fuller life, free from suffering and more helpfully contribute the well-being of those around me. This was my second big lesson. This journey will require consistent effort. It will not happen by itself. Nothing changes if nothing changes!